Last Spring, I was nervous to sell my van…

That’s why it took me another 8 months to list it.

I had gotten a few other longer contract jobs to get me through 2019, but come January, I was finally ready to part ways with Shasta.

I was determined that she had to go to a good person.

Still, I wasn’t sure of what the asking price should be.

If I had gone with sentiment alone, I’d start the bidding at a million dollars, but instead, I decided to ask around and see what other people thought.

But then I decided to trust myself. My friend Noël Russell, who’s been around vanlife for a long time, told me to list my van at $50,000. That felt just a bit high for my honest-self (I knew some things she didn’t, like the 200 watts of solar and some dents and dings on the body), but I felt content listing at $44,000, thinking I could get a little more but wanted a fast sell to the right people.

Still, I was nervous my friends were right.

Then, I looked on Craigslist in Denver and realized that at 188,000 miles, my van was not only a lot newer than many of the 250,000+ mile vehicles, but a much more functional and cooler build. It was much prettier, and the body was in great condition compared to the rest – and it was around the same price. I felt happy to know my gut on the price felt fair and accurate, and maybe even a little low.

Three weeks later, I was in Colorado to attend Outdoor Retailer. The timing was perfect as I was also dropping Shasta off to Amy and Clayton in Denver. They put a deposit down a couple weeks before and told me if I delivered it, I could take my time getting the van to Colorado.

But here’s how I went about selling the van and getting 3 cash offers in a week from listing.

1. Do your research, but don’t ask around too much

A huge mistake I made was putting too much thought into what other people told me they thought I should sell for. Realistically, they didn’t know much – or at least not as much as me – because they weren’t active in the vanlife world.

What worked for me was looking at Instagram accounts like @vanlifetrader and asking around to friends who had sold their vans. The stories were often similar:

“I sold it fast and could have asked for more.”

“We were asking for too much, but dropped the price and it sold immediately.”

Then I went to Craigslist to compare with similar vehicles. Some of the listed prices were ballooned, others you can tell are “deals” but come with a likely need to replace the engine.

Whatever you do, don’t bother with people who talk to you about the Kelly Blue Book value as there’s not a single van in the US going for those prices, let alone with a build inside. KBB hasn’t factored in the vanlife phenomenon yet.

2. Be accurate with your description, and your price

I understood Shasta was special to me, but you can’t charge for sentimental feelings. She also wasn’t pristine. I had done a good job stopping rust and doing bodywork, but there were still scratches. A T1N Dodge Sprinter is desirable and the engines routinely last 300,000 – 500,000 miles, but 188,000 miles still isn’t new. However, I’d kept up with the engine maintenance, oil changes, replacing parts, and meticulous transmission service.

Had Shasta included a better solar, electrical system, and fridge, I would have sold for more than $50,000.

I feel like people can tell pretty quickly if you’re over-asking on the price. I recommend asking yourself if you’d buy it at the price your asking. I hate negotiating so I’d rather list my haggle price first and just stick to it. I think if I’m realistic, others will be too.

3. Show it off, take good pictures, a tour video and even create a website.

I think this is something I did well. I didn’t just snap some cell phone pictures and put up a craigslist ad. Instead, I put a little page on my website and shared the link to my Instagram, a Facebook group,  and even did a tour on my Instagram page. With the help of a few friends also sharing it on Instagram, the page got over 1,300 views in a week.

The site was good because it answered every question someone could have about the van. It also included great pictures of the interior/exterior, the roof deck, and showered all the fun you can have living in a van full-time. I also talked about the condition of the van and maintenance so people could tell I wasn’t trying to hide anything.

On a strictly honest note, if you’re selling your van, please just be a good person. We get it – vans and used vehicles don’t have warranties – but if you don’t disclose an issue you know of, that is illegal. You could get away with selling someone a lemon, but then you’d have to live with yourself which would such because you’d be living with a terrible person.

4. Reach out and ask for help

The van community is pretty small and people are always talking to us when they want to get started. Amy and Clayton found me because they’d told someone they wanted to buy a van and that person was following me when I was ready to sell. There’s a good chance your van will sell in a similar way – a friend of a friend, someone who’s been watching from afar, and they’re saving up and waiting as you read this to find the perfect home – which is your home – to start making memories.

So, all this to say:

If you have any questions you can reach out to me at @travywild on Instagram. 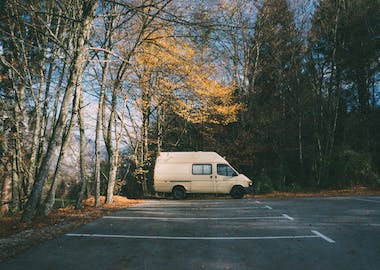 5 Things to Look for When Buying a Used Van

Purchasing a used van is a great first step into #vanlife, and in theory, should be cheaper than purchasing a brand-spanking-new vehicle… Right? 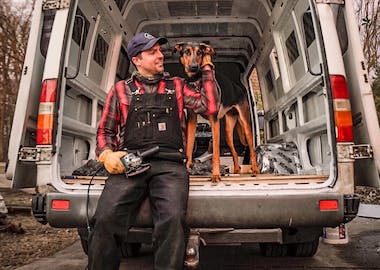 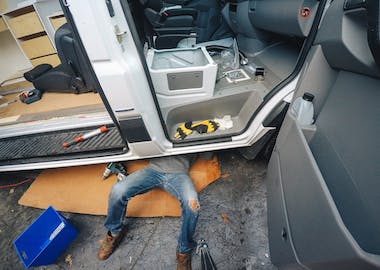 While many Van Lifers are looking for a less-traditional way of life, there’s one thing we can all agree on…