The True Instagram-Unworthy Story About Doing Vanlife With a Dog

During my first year of Vanlife, I felt one thing, a want since childhood, was missing.

Before I ventured into the vanlife world, I was working at a job that required me to frequently travel overseas. During this phase of my life, a dog was simply out of the question. Shortly after leaving this job, I was religiously searching dog adoption sites.

I quit my travel job on October 10th and on October 30th a picture of a dog popped up at the Escondido Humane Societies website.

The dog’s placeholder name was Savannah and I knew she was mine.

My birthday was the next day and I decided she’d be the perfect gift. I applied to adopt her, and by November 2nd, I was able to meet her, get all the paperwork sorted, and finally take her home.

I watched as an engraver carved her new name, A-Y-L-A, onto a tag at the pet store.

We went to the ocean to start our dream life of travels and fun. I was so happy to have a dog of my own; a friend and companion to have fun with and curb some loneliness. A new friend to come home to; face licks, tail wagging, and all.

Well, that’s about where the dream went on pause…

I’ll admit to being overly eager, stubborn, and optimistic. While those things ended up working against me, in the beginning, they may have ended up saving a dog’s life and gaining me a best friend.

Ayla had been living in harsh and possibly abusive conditions. She even had a patch of fur missing from her side due to stress. When we went out into my world she turned into the most scared dog I had ever seen.

Her quiet curiosity at the shelter turned into aggression, fear, and crazed barking.

Within the first day of having her, she had a complete meltdown meeting friends. Later, when I tried taking her for a run, she jumped up, wrapped her long front paws around my arm, and bit me in the ribs. My skin broke. It didn’t bleed, but it was enough to spook me.

The following are what ended up being her biggest events and issues:

Basically, Ayla was afraid – terrified – and didn’t trust the world.

My heart broke for her. The fear of her biting a stranger was the worst, but I also wanted my dog to be social, friendly, and not causing me constant worry while we traveled. She needed to be able to come with me to places.

After a few weeks and talks with my vet and the shelter, I scheduled a return date for her… but I skipped it. I told myself she could improve.

Exhausted and fearful I wasn’t the best owner for her, I set another return date after she bit me in the face again… But I skipped that appointment too. I was afraid they would put her down.

I realized all her worries and triggers were irrational, but she didn’t know that. She was a fifty-pound dog who was worried about everything, who never felt secure in the van, who tried to scare everything away with barks and big teeth.

This is around the time I decided I couldn’t make her unafraid by showing her everything else was okay. I had to show her SHE was okay, or more importantly, WE were okay.

This is when we started what I call “Brave Training”. It was basically geared towards everything being fun, but also not avoiding or pulling her back from the things she was barking at.

*Before we get into that, I want to say we finally resolved her stomach issues and after months of getting sick, she started packing on the weight. What worked ended up being a new food (the 5th we tried), probiotic powder, Firm Up Pumpkin Powder, and a can of tuna… but on to the fun stuff.

Here is what “Brave Training” entailed

I don’t know why I put her up on my shoulders the first time but was very surprised when THAT of all things calmed her down.

The progress was none-the-less encouraging. We were able to walk closer to dog parks, set her down around people, and she would even sit under a table at a coffee shop or go to Home Depot with me without causing a huge scene.

Next, I decided if she was to be an adventure dog, to be brave, she had to go out and practice for real. We left on a big road trip to work on solidifying her new trajectory as a brave, healthy, and happy dog. We took the van from San Diego to Eden, Utah then Moab, Colorado, New Mexico, Arizona and back home.

Hiking was a huge thing and letting her off-leash on BLM land gave her a little freedom. For a month and a half, we climbed around boulders, learned how to fetch, swam, worked on recall, and explored anything she was fearful of with her up on my shoulders before letting her down to look for herself.

Our breakthrough moment came while camping in White Sands National Monument. We got a permit to go backpacking and camp out on the dunes. After two months of having her, she started making huge strides as a dog, but we were still struggling to bond.

This lack of connection was bothering me.

But one night in the tent the stars were looking amazing so I waited till about 1am after the moonset. The temperatures were dipping to around 30 degrees so I put Ayla in my Patagonia Nanopuff jackets (human clothes fit her) and tucked her in the sleeping bag before leaving the tent. I was only gone for about twenty minutes, but when I came back there was quite a scene.

The tent wasn’t where I’d left it but I flashed my headlamp and quickly found it flipped upside down. There, her eyes staring back at me like little headlights, was Ayla standing on the roof with the floor above her head. She had gotten out of the sleeping bag and rolled the whole tent like a gerbil ball about 30 feet from where we had been in the direction I had walked away to take pictures.

This was the moment I knew I had found my dog, we were in it together, and all the work and time together was bonding us after all.

Since then, she’s successfully overcome all her fears except for heights, which I’m fine with because it does keep her safe. She loves kids, loves playing with dogs, still warms up to women faster than men but loves everyone, and is everyone’s favorite part of my Vanlife journey, including mine.

One thing hasn’t changed though, we still get in some good shoulder time as she still likes hanging up there with her Poppo.

I’ll share more in a future article about all things/hacks/products and tips for living in a van with a dog, but I wanted to start off with this encouraging piece.

No matter what dog you are getting it’ll likely be harder than you think. The van will make it harder, but you can always look into getting a senior dog or reliably calmer and easier breed too. No matter what, there will be setbacks and discouraging parts, but Ayla’s story shows even the hardest of dogs can turn out to be the best of friends.

Just be prepared to stay positive, spend lots of money and time, and never give up – especially with rescues. If you’re not ready to do that, it’s perfectly okay. Just come back when you are. 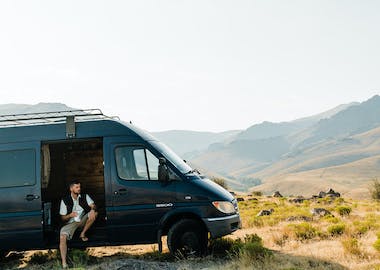 The original intent behind my venturing into life on the road in 2016 was to write. 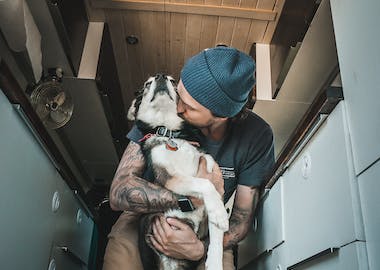 Big Changes in Vanlife – What’s Next For Us?

Since converting a new van in -40°C weather isn’t really an option, I got some shop space! 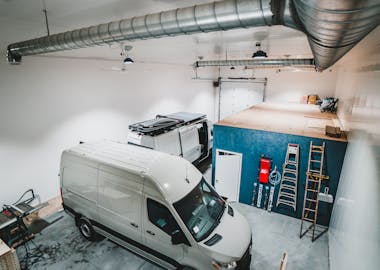 It’s time to show you some of the progress we’ve made on the new shop renovations.