When I started the entire van build process I knew that I wanted the van to feel like a home. If you’ve been following along you will know that I didn’t make many compromises in the build process.

Many people who plan to convert a van into an RV only plan on using the vehicle for shorter camping trips and weekend warrior expeditions, so for these people it’s much easier to get away with smaller and less fully equipped kitchens.

Living in the van is already a pretty big change for me and one of the things I wanted to focus on was eating healthier and providing myself with a more balanced diet.

By putting in a nice two burner induction cooktop and allocating enough storage for proper cookware it has allowed me to cook well balanced meals in the van. Cooking for me was something I always enjoyed but living at home I found it hard to motivate myself to cook for one person. Since living in this space I have really enjoyed cooking again and look forward to making meals on the road.

This isn’t the exact one that I bought for my van but close enough. I lucked out and found a white one on sale at Home Depot for $5 and just painted it black. When I put the van together and told my Dad I wanted to drill a hole into the nice countertop he thought it was a bad idea, but now that I have it in the van it’s become one of my favorite things because I use it everyday multiple times a day….mines just filled with dish soap. 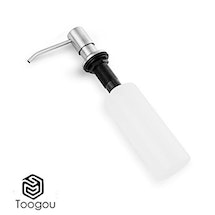 The sink I selected for the van was the SpinFLo Kitchen center. The sink has been great in the van and I really like having the lid option. I haven't used all the other accessories such as the drain pan, cutting board and wash tub, mainly because with the sink rack on the lid you can’t close the lid with those items inside. 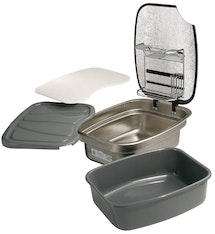 When I selected the faucet for my sink I wanted to get a black faucet (just because I thought it looked cool) and I wanted one that had a pull out sprayer. This faucet met both my requirements and was available at a reasonable price. So far it's been a good faucet and hasn’t had any major issues. 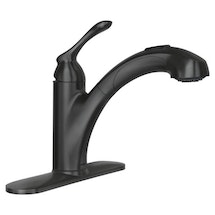 Having the paper towel holder above the sink is a handy little feature in the van but just an FYI when driving down the highway with the front windows open the paper towel roll on occasion has found the need to completely unwind itself. 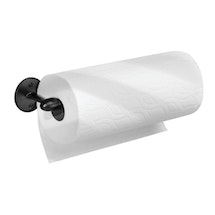 For my fridge I went with the Whynter FM-62DZ fridge. This particular fridge is more affordable than some of the other units and so far it has worked really well. A couple things to keep in mind is that this fridge does consume more power than the Dometic, ARB or Engel units but so far it hasn’t been a huge issue for me, but just keep this in mind when you are planning your solar system and power consumption. This particular fridge pulls around 6-7amps when the compressor is on full blast. One thing about choosing a fridge is I highly recommend getting a top loading fridge, you can cram way more stuff inside as compared to an upright side loading fridge and this makes bringing enough food for long trips much easier. 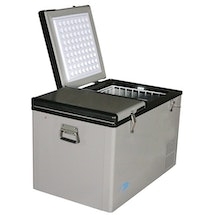 I opted to go with a dual burner induction cooktop in the van. My build has a large solar array and decent battery bank which makes powering this cooktop not an issue. The induction cooktop is really handy to have in the van and super easy to keep clean. If you are considering going the induction route one thing to keep in mind is that 90% of the time I only use 1 burner so if you are looking to save some space and money you could likely go with the single burner option. When I was putting together the van one thing that I wanted to accomplish was to have a single fuel source. So this is why I didn’t go with a propane cooktop and the same reason I installed an Espar Heater in the van. 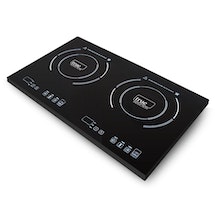 The counter that I used in my van was a wooden oak butcher block counter from Ikea. The Ikea countertops is a good quality and is solid wood all the way through. I was able to purchase a single countertop section from Ikea and cut it in half to use on either side of the van. When I was looking at the different counters from Ikea none of them matched the dark wood stain I used on the upper cabinets very well, so I sanded down the Ikea counter and stained it using the same stain from the upper cabinets then sealed everything with 6 coats of a food safe sealant. 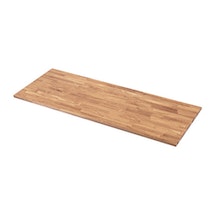 The Springfield Gas Powered Table Pedestal will allow you to position your RV table at several different heights. 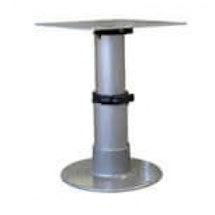 Since I've lived in the van for an extended period of time now, latches have been something that I've played around with a lot. Originally, I installed magnetic latches, which look great as they are hidden. They also worked great for the most part, but I found that if you overload the drawer and find yourself off-roading, they can open up on you. For that reason, I've changed all my latches over to slam latches. 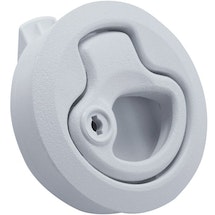